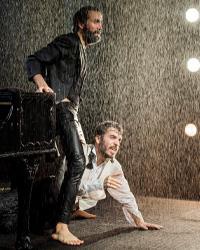 Caliban, alone and isolated again after the storm, once again becomes the master of his little kingdom, but he has been infected by the plague of language, which he can only use to evoke the world that has betrayed him, an infected universe. This performance was conceived as an acoustic piece, in which the text and music (Beethoven’s Tempest Sonata performed live) play the same role, filling us with their rhythmic, poetic, grammatical and dramatic flavour.

Available visits for the {0}

Your cart is empty.

We accept the following payment types and guarantee that your Internet transactions are safe: